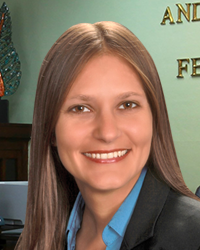 Victoria Lyn Anderson primarily practices in the areas of domestic and family law, criminal law, and bankruptcy. Ms. Anderson’s over 12 years of experience in these areas of law has given her a unique ability to not only achieve results but to assist clients though difficult, complicated and sometimes incredibly emotional events.

Ms. Anderson has been a resident of central Florida for over 25 years. She received her Bachelors in Political Science from the University of Central Florida and a Juris Doctorate from Barry University School of Law. At Barry University Ms. Anderson received a certificate for completing a concentration in the areas of Children and Family law which has provided her the opportunity to explore these areas intricately and gain an even greater knowledge and understanding which she uses to assist her client’s through these difficult times.

Ms. Anderson has worked in the legal field since 1997 and since then has worked at all levels within private law firms. Ms. Anderson’s background has helped her develop a high level of expertise that is conducive to achieving results.