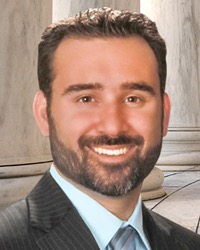 Michael Ferrin practices in the areas of domestic and family law, criminal law, and bankruptcy. Mr. Ferrin’s over 12 years of experience has given him a unique ability to understand the difficulties one can face when confronted with the issues involved in these areas. Mr. Ferrin prides himself on treating each client as if they were family and making sure that as a client you are well informed and receive the highest level of representation.

Mr. Ferrin has been a resident of Florida for over 25 years. He was born in New Orleans and raised in Key West Florida. He received his bachelors in Business Administration from the University of Florida and his law degree from Barry University School of Law.

Mr. Ferrin has always had the desire to help individuals which is why he has always worked in private practice. On his path to helping individuals Mr. Ferrin had the opportunity to work for one of Central Florida’s largest private bankruptcy firms. While doing so he was able to represent many individuals and small businesses in their bankruptcies some of which had debts exceeding twenty million dollars, $20,000,000.

Mr. Ferrin is involved in the following organizations and affiliations: US Bankruptcy Court Middle District of Florida, The Florida Bar, The Central Florida Bankruptcy Lawyers Association, and the Orange County Bar Association.

Additionally, Mr. Ferrin is a former adjunct professor for Everest University. Mr. Ferrin is dedicated to helping the community and accepts several pro bono cases from Orange County each year.