Can I Seek Pet Custody in My Florida Divorce? 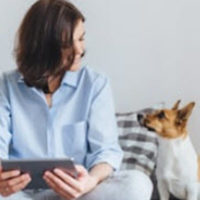 While the term “custody” usually gets discussed in a divorce case involving minor children, many people in Florida consider their pets to be important parts of the family. Accordingly, when spouses own a pet together, the prospect of divorce can raise the issue of pet custody. If you do not own a pet, you might not immediately recognize the seriousness of this topic. Yet for anyone who has a cat or dog in their household, determining who gets to keep the pet often is one of the most contentious matters in a Florida divorce—especially if the couple does not have minor children from the marriage. To be sure, as an article in Psychology Today underscores, “in our society, dogs are often viewed as children.”

So, if you are considering divorce, can you seek pet custody? In short, the answer is no: pets are treated as property, and courts “distribute” pets according to laws of property division. However, we want to provide you with more information about pet ownership and custody for divorce purposes, and to discuss the ways in which Florida law compares to divorce laws in other states.

According to an article from the American Bar Association (ABA), about seven out of ten households in the U.S., or 70 percent, currently own a pet. Indeed, many people who own pets consider themselves to be “pet parents,” and they expect that a court will consider the same factors when determining parental responsibility for kids as they will for the family dog. However, many states do not recognize pets when it comes to making custody determinations in a divorce.

Several states have enacted pet custody laws that range from laws that handle pet custody cases in much the same way as child custody cases, to laws that recognize the need for some kind of custody determination when it comes to pets, yet with an emphasis on distinguishing pets from children in clear ways. In other words, in some states, couples getting divorced can in fact seek pet custody. In other states that recognize some need for pet custody, courts will allow an arrangement that falls somewhere between recognizing pets as family members and recognizing pets as property. States that do not have pet custody laws in any form recognize pets only as property for purposes of determining who gets the pet. Currently, Alaska, California, and Illinois have pet custody laws in place while others are considering them.

Accordingly, if you got your pet before you got married and provided all or the majority of financial care for your pet from separate assets during the marriage, the pet may be classified as separate property and you will likely keep the pet. However, if you and your spouse adopted or bought the pet during the marriage, the pet likely will be classified as marital property and will be distributed to the spouses based on the same set of statutory factors used to distribute other marital property.

If you have questions about pets and divorce, an experienced Orlando divorce attorney can help. Contact Anderson & Ferrin for more information.