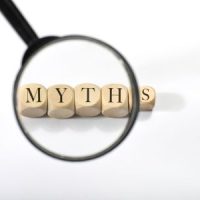 Divorce is very common and so, people currently going through the process often know friends and family members who have also been through it before. These individuals may give well-intentioned advice about what one can expect when going through the process. Other people, who may not have even gotten a divorce before, might also offer their own opinions or advice based on things they have seen in television and movies.

Much of this advice, even though it is given with the best of intentions, is wrong and has led to many myths about the process. Below, our Orlando divorce lawyer outlines the biggest myths about divorce, and the truth behind them.

In years past, women often stayed home to raise the children and take care of the household while men worked outside of the house. Due to this common arrangement at the time, women were often awarded alimony during the divorce process. Today, this is clearly no longer the case. Many households require two incomes and it is not uncommon for women to be the breadwinners of the household. The family courts in Orlando will take many factors into consideration, including the income of each party. Gender, though, is never a consideration when alimony is awarded.

For the same reasons women were often awarded alimony in the past, it was also not uncommon for mothers to be awarded child custody. This was due to the fact that mothers were often considered the primary caregiver. Today, this is also no longer the case. The family courts today generally believe it is in the best interests of the child for both parents to share custody. There are a number of factors the courts will consider when awarding child custody, but gender is not one of them.

A Child’s Preference is Considered During Custody Hearings

Again, the only factor a judge will consider during custody hearings is what is in the best interests of the child. Family law judges can consider the preference of the child when they are of a certain age or maturity. However, there is never any guarantee that the child’s preference will be considered.

Visitation Can Be Withheld if Child Support is Not Received

Throughout Florida, all parents are expected to provide for their child financially. When one parent has the majority of parenting time, they often believe they can withhold visitation if the other parent does not pay child support. This is blatantly untrue. The only way visitation can be changed is by a court order. Failing to abide by the parenting plan and visitation schedule can result in serious penalties.

You Do Not Need a Divorce Lawyer in Orlando

There is no legal requirement that states you must work with an Orlando family lawyer. However, if you do not, you may not receive the fair settlement you deserve. At Anderson & Ferrin, P.A., our Orlando divorce lawyer can guide you through the process, ensure your rights are upheld, and provide the sound legal advice you need. Call us now at 407-412-7041 or contact us online to schedule a free consultation.