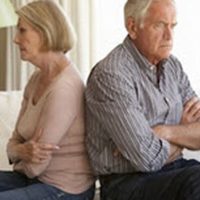 The idea of divorce is a scary concept for many people. For couples who have been married for several decades, though, the thought of divorce is downright terrifying. The divorce rate among Baby Boomers has tripled since the 1970s, and these cases are often referred to as ‘gray divorces.’ Gray divorces are becoming far more common today and when ending a marriage at this stage in life, people have many questions. Below, our Orlando divorce lawyer outlines some of the most frequently asked questions we hear about gray divorce, and the answers to them.

What is a Gray Divorce?

A gray divorce refers to any dissolution of marriage that involves people over the age of 50 years old. Gray divorces often have many more complex issues than other cases, including those involving spousal support and property division.

Why are Gray Divorces on the Rise?

Divorce rates are dropping for younger and middle-aged Americans. At the same time, though, the divorce rate for people over the age of 50 have steadily increased since the 1990s. The Baby Boomer generation is largely attributed to the increase in gray divorces. During the 1970s and 1980s, Baby Boomers started getting divorced at unprecedented rates. From 1978 to 1982, the divorce rate was at its highest. At this time, most Baby Boomers were in their 20s or 30s.

As Baby Boomers have aged and remarried, the chance of divorce again is much higher. Sixty percent of second marriages end in divorce, and third marriages are even likelier to end in divorce.

What Causes a Gray Divorce?

For many people going through a gray divorce, it has been a long time coming. Many people choose to wait until their children are grown and have moved out of the family home before they start divorce proceedings. These couples have often been living largely separate lives for many years before getting a divorce.

As medical and technological advances continue to impact our lives, it has also resulted in longer life expectancies. Today, people can often expect to live for 15 to 20 years or longer after they retire. As people start to look at the rest of their lives, they often realize there is a lot of time left and they want to spend it happily on their own, or with someone other than their current spouse.

Major life changes, such as retiring and empty-nesting can also shine a light on issues in a relationship. Many couples find that once the children leave the home, they no longer have anything to talk about. Others may find they no longer have the personal space they need once they, along with their spouse, have retired.

How Can a Divorce Lawyer in Orlando Help You Prepare for a Gray Divorce?

Many older couples are more financially stable than younger individuals who end their marriage. Although this is often good news, it can also make the divorce process more complex. At Anderson & Ferrin, P.A., our Orlando divorce lawyer can help you overcome the challenges these cases present and make sure you are properly prepared for the process. Call us now at 407-412-7041 or contact us online to schedule a free consultation and to learn more.