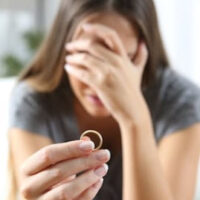 As the article explains, there is a significant amount of research on divorce and its “inherited” nature that demonstrates how divorce “often perpetuates itself across generations.” To be sure, much of this research concludes that children of divorce are more likely to get divorced themselves.

In the 1990s, Nicholas Wolfinger, a University of Utah sociologist, began conducting research into divorce across family generations. He determined that people with parents who are divorced are more likely to marry other people with separated parents, and those couples “are more likely to separate than couples in which just one person is the child of divorced parents. Yet it is not exactly correct to describe this phenomenon in terms of “inherited” traits. Rather, children with divorced parents learn certain models for interacting in a relationship, and that learned knowledge may result in those kids being more likely to get divorced themselves.

As Wolfinger clarifies, if kids see their parents argue, but also watch them work through their issues, they learn that a marriage can survive disagreements. Conversely, when kids see their parents fighting and ultimately learn that their parents are getting divorced, they learn that divorce may be the solution to marital problems. Yet at the same time, Wolfinger does suggest that some genetic characteristics may result in a person being more likely to get divorced. For example, some behavioral traits may in fact be inherited. As Wolfinger describes it, “there is some component of being a jerk that appears to be purely genetic.” If someone is predisposed to be disagreeable or to lack compassion, that trait could result in that person being more likely to divorce than someone without that trait.

Divorce is Less Inherited Than It Used to Be

Even though children with divorced parents may be more likely to get divorced themselves, the article highlights how this trend has shifted in recent years. In the 1970s, kids with divorced parents were about two times as likely as their peers from “intact homes” to get divorced, while that same group is now only 1.2 times as likely as someone from an intact home to have a marriage that ends in divorce.

There are a number of possible reasons for this. First, more people are getting divorced, which means that more children from intact homes also are divorcing. At the same time, fewer children from divorced homes are getting married in the first place. Ultimately, when parents are considering getting divorced, the research implies that their decision is less likely to have an effect on their children than it would have in previous decades.

If you have questions about getting divorced in Florida, an experienced Orlando divorce attorney can speak with you today. Contact Anderson & Ferrin for more information.