Will My Spouse Receive Half Of My Personal Injury Settlement During Divorce? 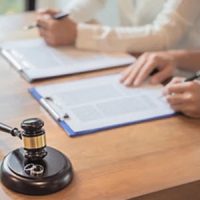 Generally speaking, personal injury settlement awards are not part of the property division process during a divorce. If the injured party was awarded the settlement prior to the marriage and kept the funds separate from marital funds, their spouse has no right to it in the event of divorce. However, the issue is not always so clear-cut and some exceptions do apply that could affect your case.

Settlement awards are intended to make a person whole again after an accident caused by someone else’s negligence. To do this, a number of damages are awarded for the losses the accident victim incurred. A spouse divorcing the injured party is entitled to certain losses, such as loss of consortium. Damages for loss of consortium are intended to compensate the injured party for no longer being able to be intimate with their spouse. Due to the fact that this loss mostly applies to the spouse, they may have a right to a portion of these damages during divorce.

Additionally, it is generally presumed that a person’s income contributed to the marital household and therefore, is considered marital property. When the injured party receives damages for lost income, a portion of them could be divided during divorce because the other spouse would have benefited from the lost income just as the accident victim would have.

There are some assets that are typically not included in property division hearings. Inheritances are one such type of asset, as are personal injury settlement awards. However, if the injured party commingles their settlement award with marital funds, such as placing it in a joint bank account they hold with their spouse, there is a chance the settlement award will be subjected to division.

Immediately following an accident, the victim starts incurring medical bills. Unfortunately, they do not receive their settlement award until months afterward. In the meantime, marital funds the couple shares often pays for these and other expenses. When that is the case, the non-injured spouse may have a right to a portion of the damages for medical expenses, as well.

Our Florida Divorce Lawyers Can Help You Retain What is Yours

If you are going through a divorce and are worried about a personal injury settlement, or any other asset, being divided during the process, our Orlando divorce lawyers are here to help. At Anderson & Ferrin, our skilled attorneys will help you prepare arguments for keeping what is rightfully yours and securing the fair settlement you deserve. Call us today at 407-412-7041 or fill out our online form to schedule a free consultation.