Impact of Divorce on Children 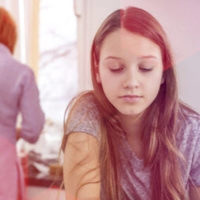 Thinking about divorce for many couples means considering not only the impact of the divorce on the two of you, but also on your children. Getting divorced can be difficult for kids and can lead to confusion and anxiety. Many parents want to think through options for making divorce less stressful for their children, and to consider options for helping their kids through the divorce process. Numerous studies have been conducted on the effects that divorce has on families with young children, and researchers have reached various conclusions. An article in Psychology Today discusses the ways in which kids of different ages tend to experience divorce differently, and the varied emotional impact that divorce can have depending upon factors specific to the children and the family.

In general, regardless of family circumstances, younger children tend to take divorce harder than older kids. As the article discusses, younger kids under the age of eight or nine “often react to parental divorce in contrast to how adolescents . . . often respond.” For kids of any age, “divorce introduces a massive change,” yet age—and stage of development—can play a significant role in determining how a child may be more likely to respond to news of their parents’ divorce.

For young children who have not reached adolescence, divorce tends to result in regressive behaviors. In older kids who are at the stage of adolescence, divorce tends to lead to more aggressive (than regressive) behaviors. In terms of development, these distinctions mean that younger children may have more difficulty recovering from divorce than older kids. With younger children, the article explains how divorce can “intensify the child’s dependence.” Differently, with older kids, divorce “tends to accelerate the adolescent’s independence.”

Since adolescents already have begun the process of learning to be independent, the fact that divorce often leads to more independent behaviors tends to mean that older kids do not struggle with personal growth as younger children can. For a young child, “divorce shakes trust in dependency on parents who now behave in an extremely undependable way.” Unlike many older children, younger kids tend to experience “separation anxieties, crying at bedtimes, breaking toilet training, bed-wetting, clinging, whining, tantrums, and temporary loss of established self-care skills.”

Establishing Routines to Lessen the Effects of Divorce

According to the article, some of the best tips for preventing long-term psychological effects of divorce on younger children is to establish routines and to engage in co-parenting. While it may be difficult to think about working closely with your ex to establish routines, it is often one of the most important things to do to ensure that a young child can recover from divorce.

As the article underscores, however, these are only general trends among age groups. In some cases, kids may behave extremely differently under distinct circumstances.

If you have questions about divorce and co-parenting, you should speak with an Orlando divorce lawyer today. Contact Anderson & Ferrin for more information.