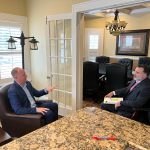 Michael Ferrin was recently interviewed to weigh in on the current Roe v Wade developments and the effect they may have on same-sex marriage. The leaked Supreme Court ruling draft is igniting unease for abortion-rights advocates and other groups – including the LGBTQ community – over the possibility of a similar ruling for same-sex… Read More »